KA-BAR #1493
TDI INVESTIGATOR Law Enforcement Knife, probably the best thought out law enforcement knife on the market, was designed by John Benner, founder of Tactical Defense Institute.
The Investigator is the perfect low profile EDC (Everyday Carry) fixed blade. Lightweight and compact, the Investigator is perfect on a belt, in a bag, or stashed in a glove-box. The sheath is ambidextrous and also fits the KA-BAR TDI 1477CB, 1480, and 1481.
With too many accreditation's and accolades to list here, and with more than 30 years' experience in the law enforcement field, John Benner, owner of TDI, spent several years looking for a manufacturer to produce his knife.
Working closely with Ka-bar over the last year, the company is finally ready to release the knife and it is sure to be one both Benner and Ka-bar can be proud of.
Benner has trained thousands of law enforcement personnel since founding TDI in 1986. Prior to that time he served as Lieutenant of the village of Fairfax Police Department, Coordinator of the Drug Abuse Reduction Task Force, and Tactical Field Commander of the Hamilton County Police Association Special Weapons and Tactics Team (S.W.A.T.).
John has developed courses for rapid tactics; tactical weapons instructor schools, defensive tactics and knife programs that are currently taught to law enforcement, military and civilian groups.
The TDI Law Enforcement Knife was designed to be used as a "last option" knife. In extreme close encounters where a suspect is attempting to take an officer's handgun or the officer cannot access his/her handgun, the TDI Knife is available.
Designed as an "offhand" knife that draws like a pistol, the reversible sheath can be worn on either the right or left side of the officer's pant belt.
Made with a non-reflective powder coated AUS 8 stainless steel blade and a textured black Nylon / Fiberglass handle, this lightweight knife is paired with a hard plastic black friction release sheath with pre-mounted clip.
The total bulk weight is only 0.15 lbs. and the knife measures 5" overall.
The 2.71" blade features the TDI logo and the KA-BAR brand name.
When worn on the pant belt the entire unit-knife and sheath-is well concealed.
To view all of the TDI self-defense products click here.
1 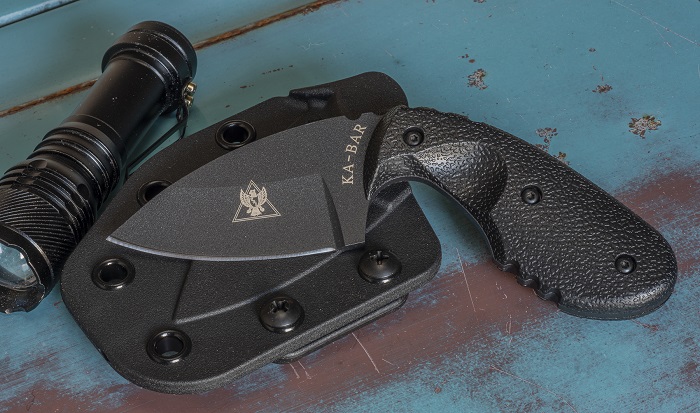 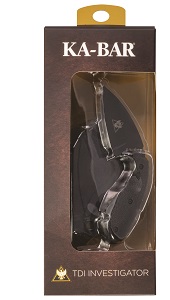