Gunny Knife
Designed by R. Lee Ermey, also known as "The Gunny". This was the last project The Gunny worked on before his passing in 2018. Created to be used in any and all terrains and situations, the Gunny Knife is made in the USA. A portion of sales of the Gunny Knife will be donated to the Fisher House Foundation, an organization that was near and dear to R. Lee Ermey.
Marine. Actor. Knife Designer. Patriot. R. Lee Ermey, also known as "The Gunny", was a US Marine for 11 years. After his time in the Marine Corps, Ermey began his second career as an actor, most notably as the iconic Gunnery Sergeant Hartman in the movie Full Metal Jacket. Ermey was in over one hundred productions, including Apocalypse Now, Seven, Full Metal Jacket, Texas Chainsaw Massacre, and countless others. Ermey was active in supporting the US Military his entire life, visiting deployed soldiers and Marines deployed as well as around the United States. The Gunny Knife was R. Lee Ermey's last project before he passed away on April 15, 2018. 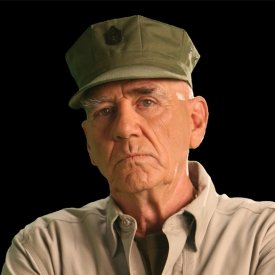